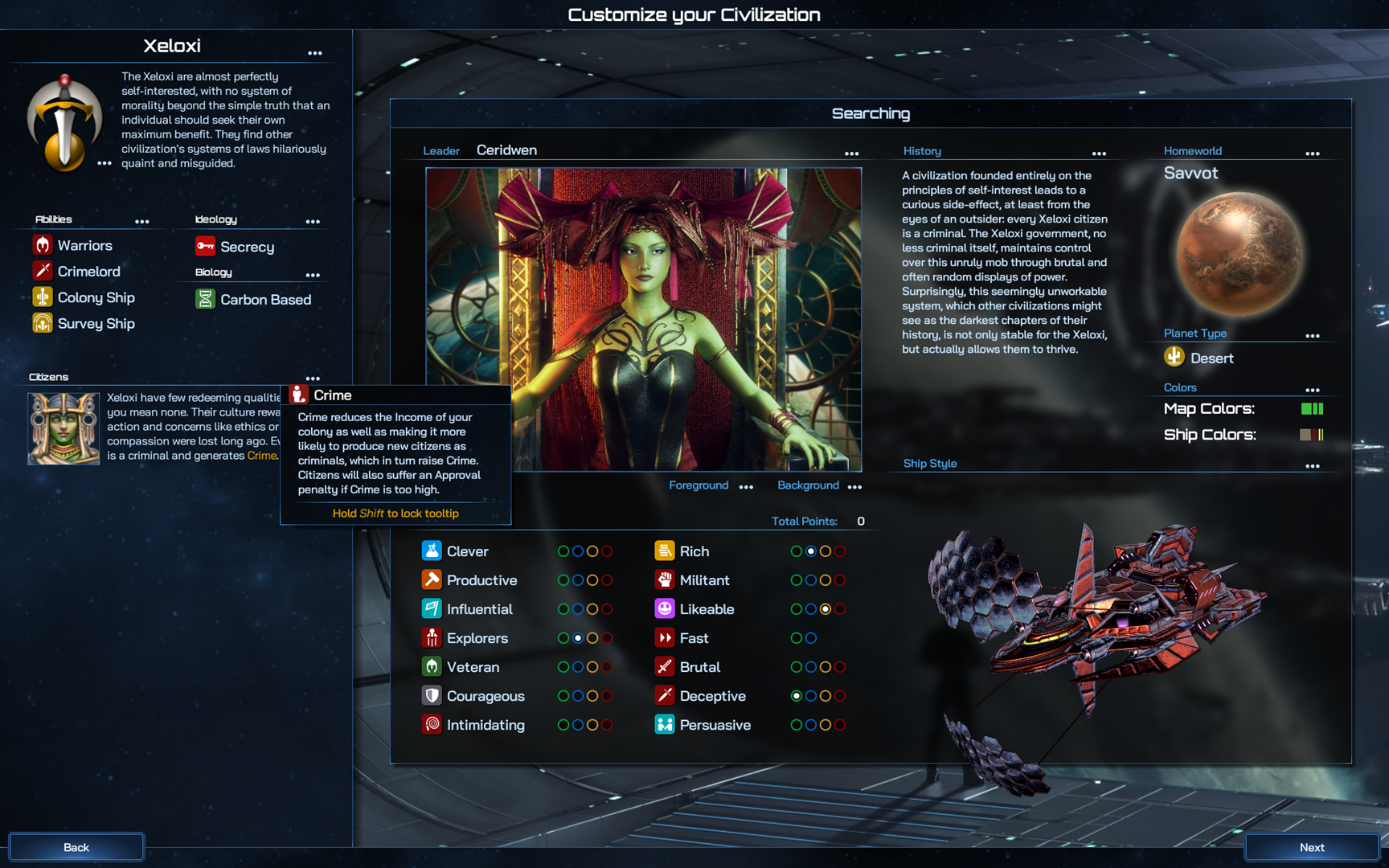 Today I decided to play a game as the Xeloxi. They are a tough civilization to play - so much so that I almost put a warning on them (as well as a few other civilizations) stating that they weren't a good selection for first-time players. They certainly run a difficulty level harder than the Terran Alliance.

I've always loved the Xeloxi's style and the concept of a crime-based civilization. Every Xeloxi citizen is a criminal, meaning that high crime is just a consequence of playing as them. The Xeloxi get some special buildings once the Crime stat on their worlds gets high enough, but the high crime is going to be a problem they have to deal with. Making it difficult to make money and to keep your citizens happy.

To be successful, you will need to focus on finding other sources of income and lean into improvements that boost Approval. The Xeloxi are temperamental and surly, especially since the Approval issues keep them from raising taxes to try to deal with the income issues. They also have the advantage of being at peace with the Pirates, which makes space exploration a little easier for them.

The Xeloxi have a few new tricks in 1.04 that we will cover here. Let's take a look. 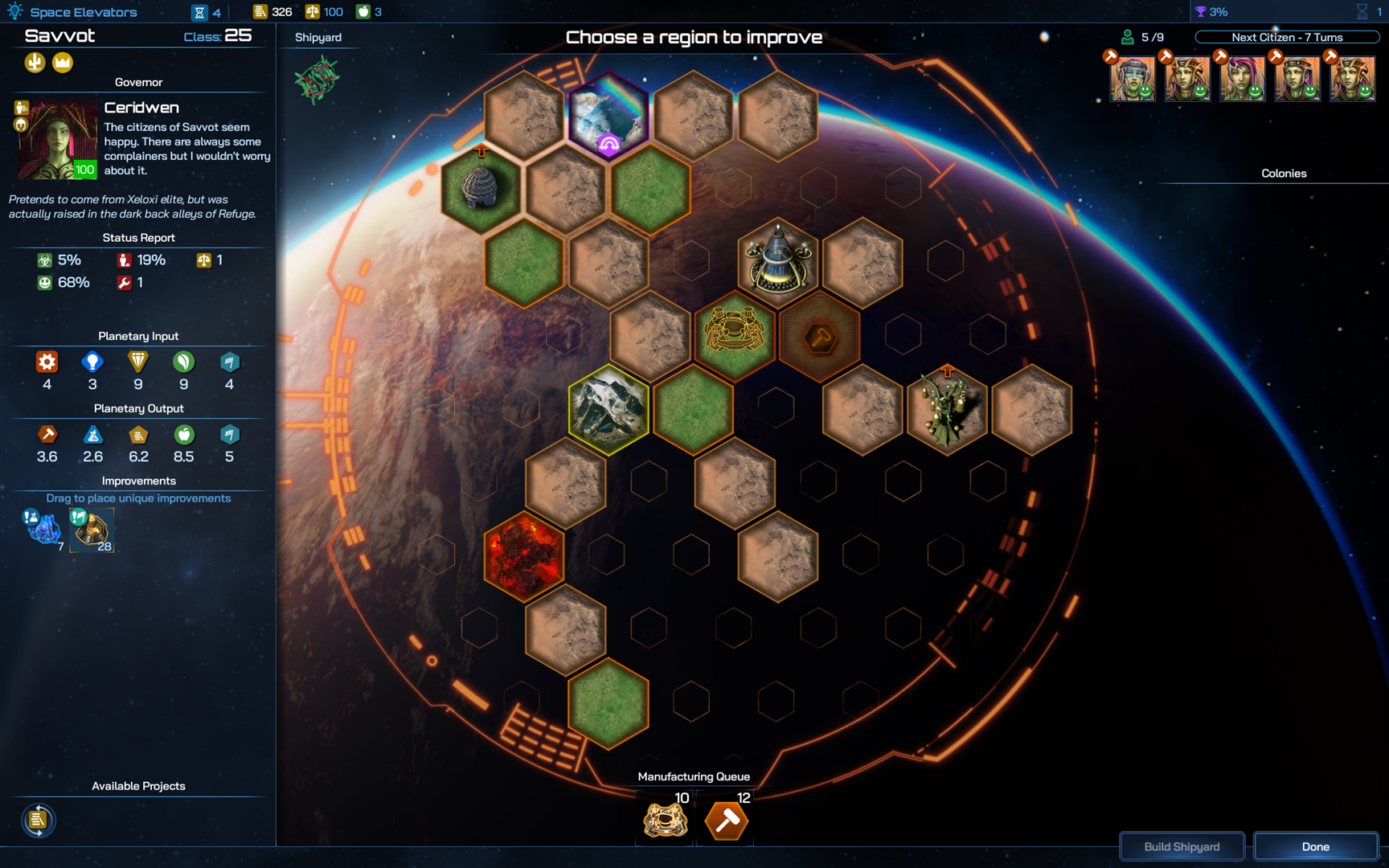 The Xeloxi's homeworld is a desert planet called Savvot. This layout in particular isn't very useful for adjacency bonuses. Normally, I use my homeworld for Manufacturing and Research, but there aren't many good places to build, so I decide to dedicate this world just to manufacturing and to search space for a world that can be my Research capital. 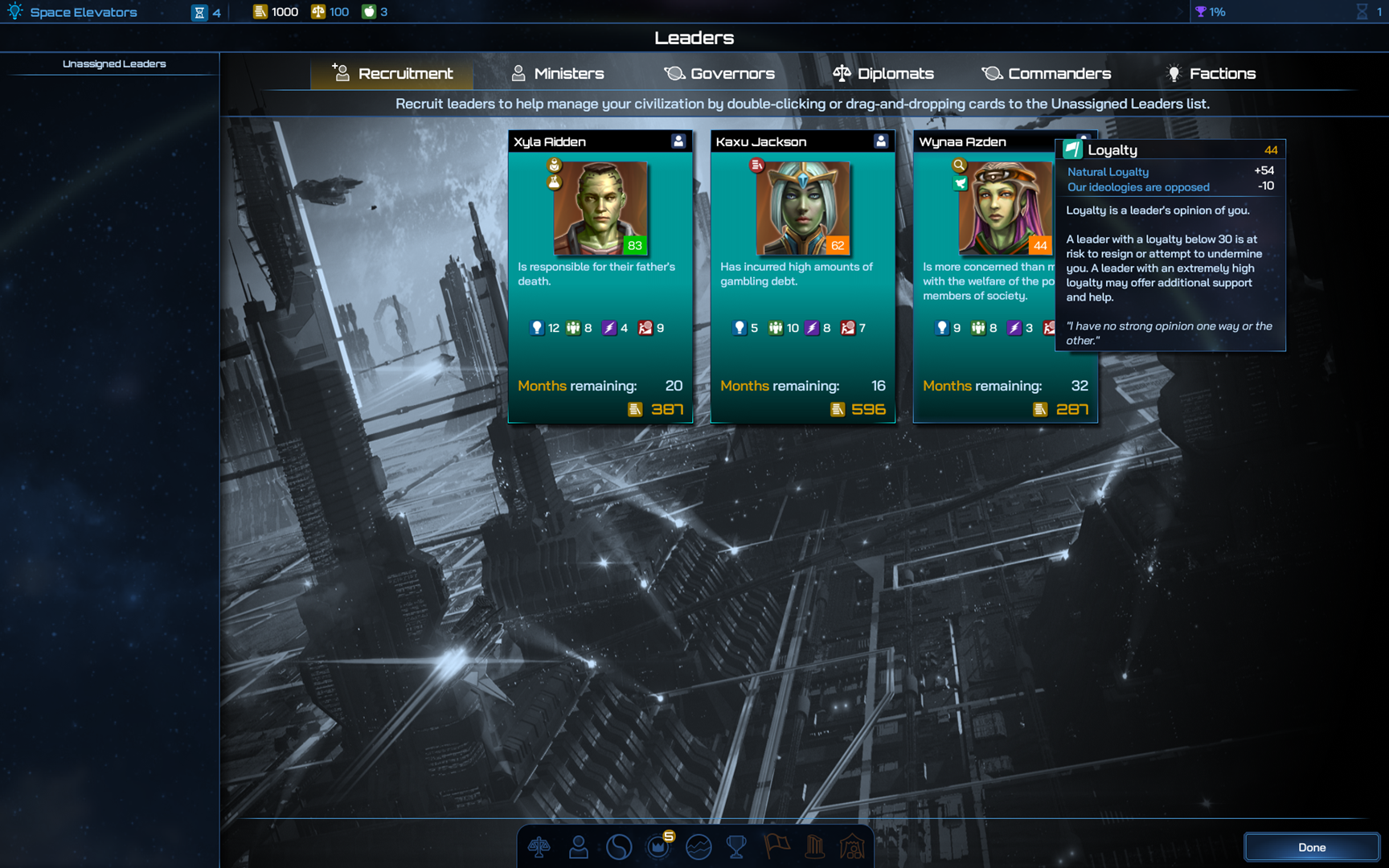 Next, I check to see if there are any promising leaders available.

Xyla Aidden is a nearly perfect leader. High Intelligence makes him an ideal Tech minister, high resolve makes him a great commander, and he has both the Environmentalist (reduces Pollution) and Biologist (increases Food) traits which would make him a great governor. An he obviously has great taste, because his 83 loyalty shows that he loves me.

Kaxu Jackson's Greedy trait means that she costs way too much for me, so I will pass on her.

Wynaa Azden really doesn't like me. She is compassionate, and that's the my polar opposite at this point. I usually pick Compassionate options, though, so I think I may convert later in the game and gain Wynaa's favor. Fortunately, she's cheap to hire and still has a reasonable Intelligence. 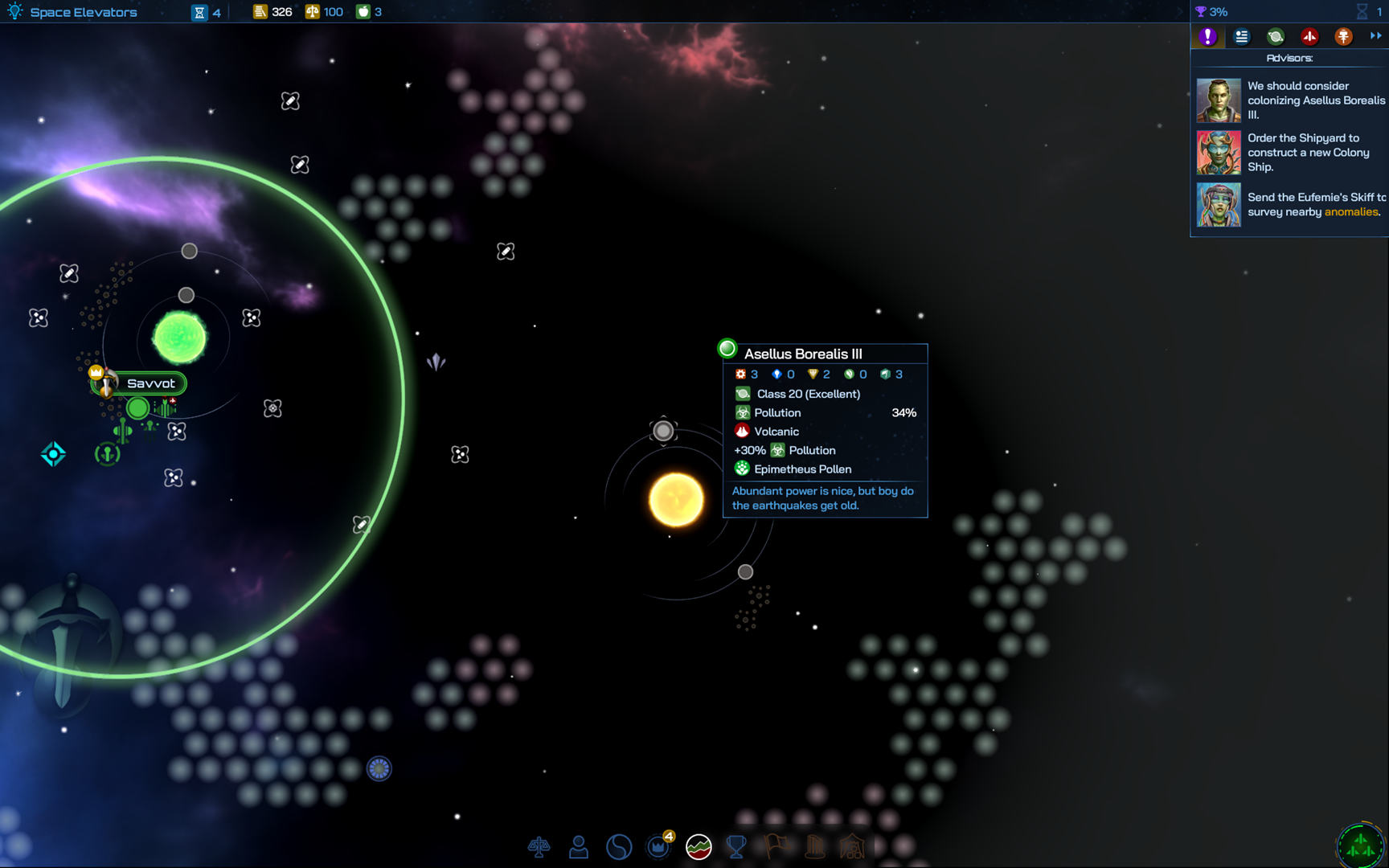 My first job is to find a Research world, and I find one nearby: Asellus Borealis III.

I know you're thinking, "it doesn't have any Technology."

But what it does have is two small worlds in its system:

That will give me 5 Technology feeding into Asellus Borealis III, which is more than enough for a decent research world. Some Executive Orders are issued to get some colony ships on their way, as I will need to take 3 planets to make this work. In just a few turns, the buildup in the Asellus Borealis system has begun.

I hire a governor for the new Core World and bemoan my already depleted treasury. It's early in the game, I'm down to 48 credits, and the Xeloxi aren't exactly income powerhouses.

I put Xyla in Eufemie's Skiff (a survey command ship), and my original survey ship is working as well, so I should get some credits there. Rather than build up a larger fleet, I have my ship work on Treasure Hunter missions to try to make more money. 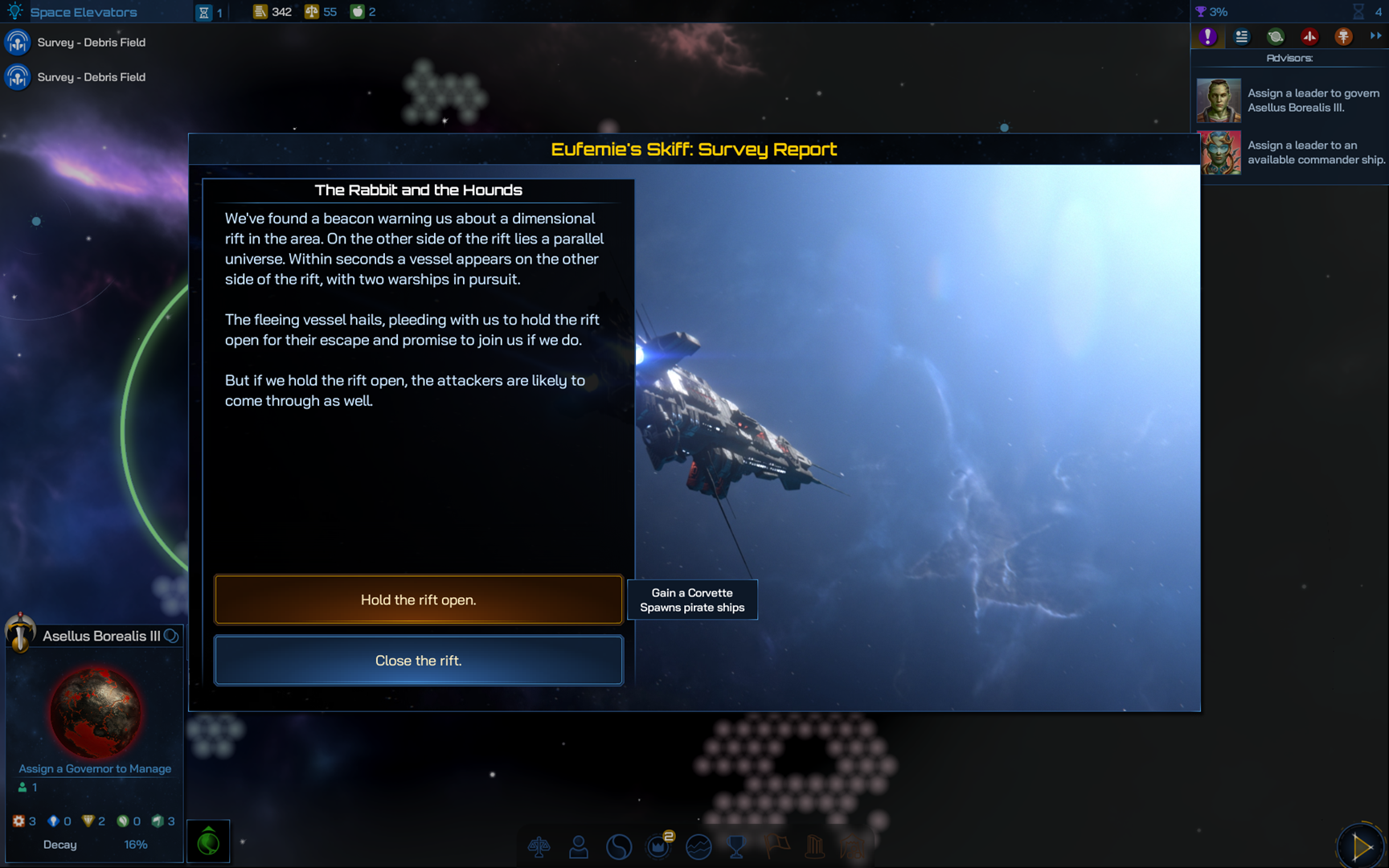 One of the first things Xyla discovers is a dimensional rift with a battle occurring on the other side. Keeping it open will earn me another ship, but will also bring some new pirate ships into the area. Fortunately, the Xeloxi are allied with the pirates - and they have a cool new power in 1.04. 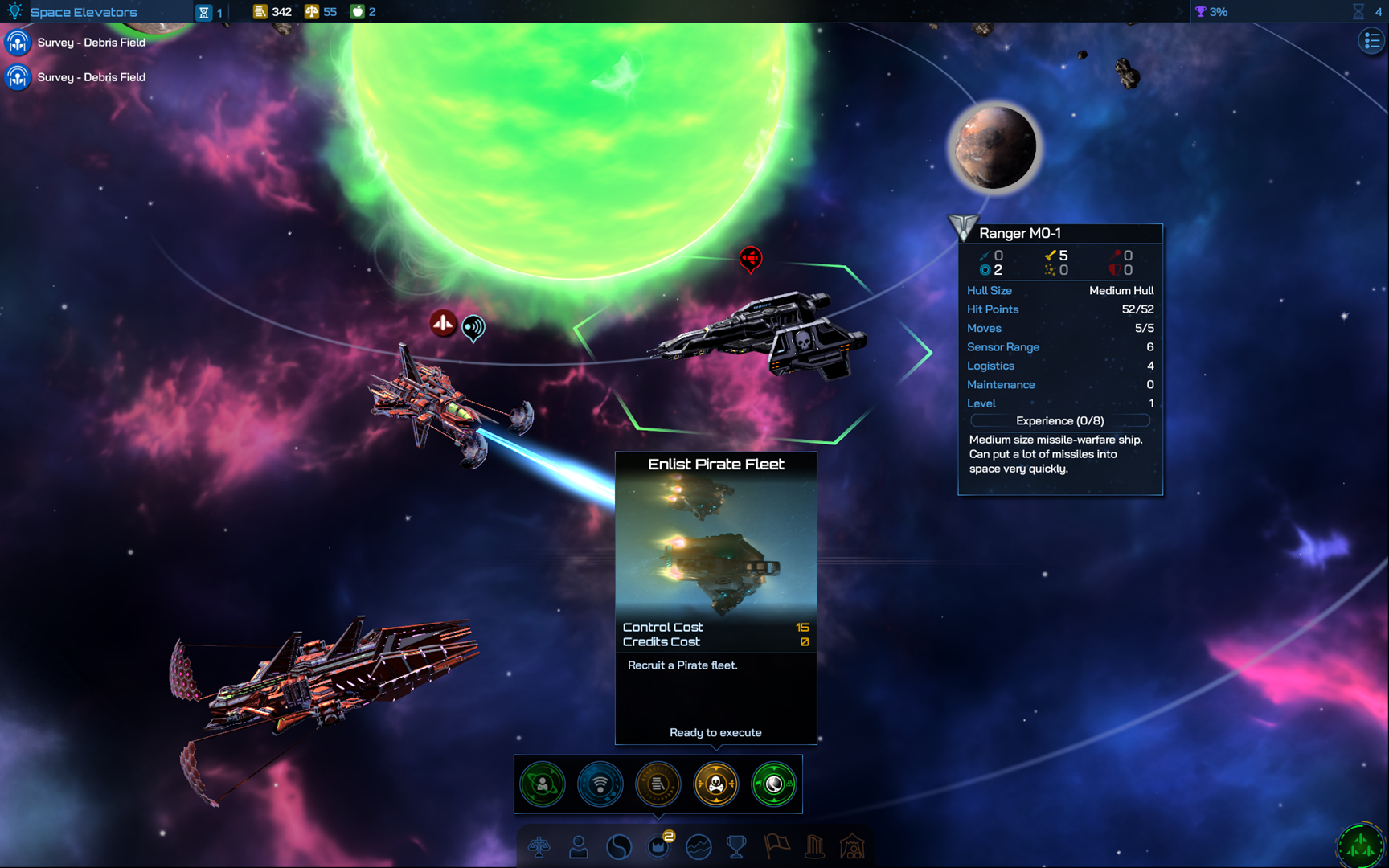 The "Enlist Pirate Fleet" executive order allows the Xeloxi to spend some control to recruit any pirate ship on the map. These nice pirate warships came through, and now they are mine.

My other option here (which may have been even better) would have been just to allow the pirate ships to go off on their own. They can cause issues for other civilizations by destroying ships and capturing colonies. If the pirates successfully capture a colony planet, the Xeloxi have another new executive order that forces the pirates turn it over.

Either way, the pirates are a resource the Xeloxi can tap into. 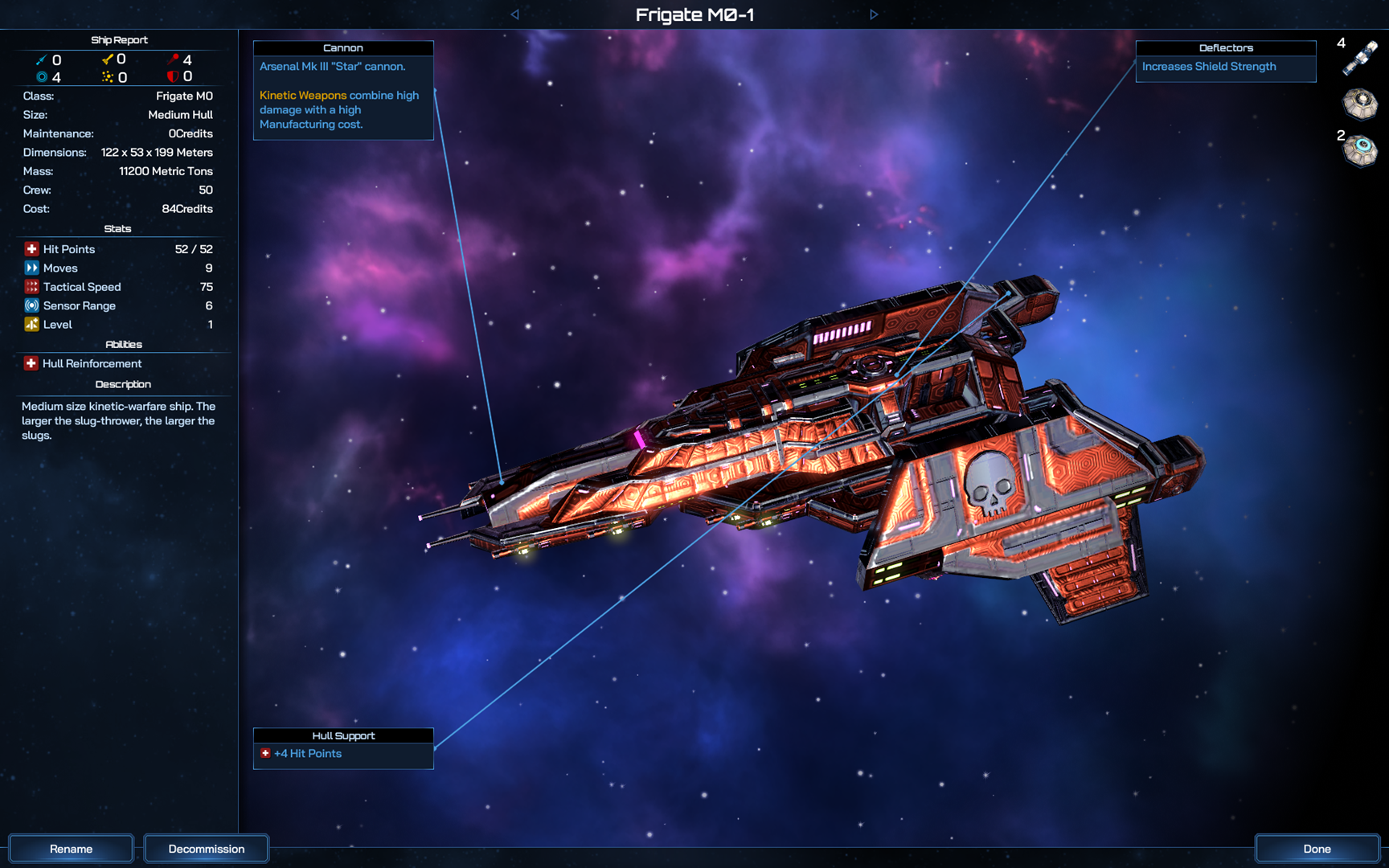 I grab the pirate warship and it joins our fleet with a fresh coat of bright red paint.

Now that I've got some new muscle, I'm even more eager to find another civilization to exploit. 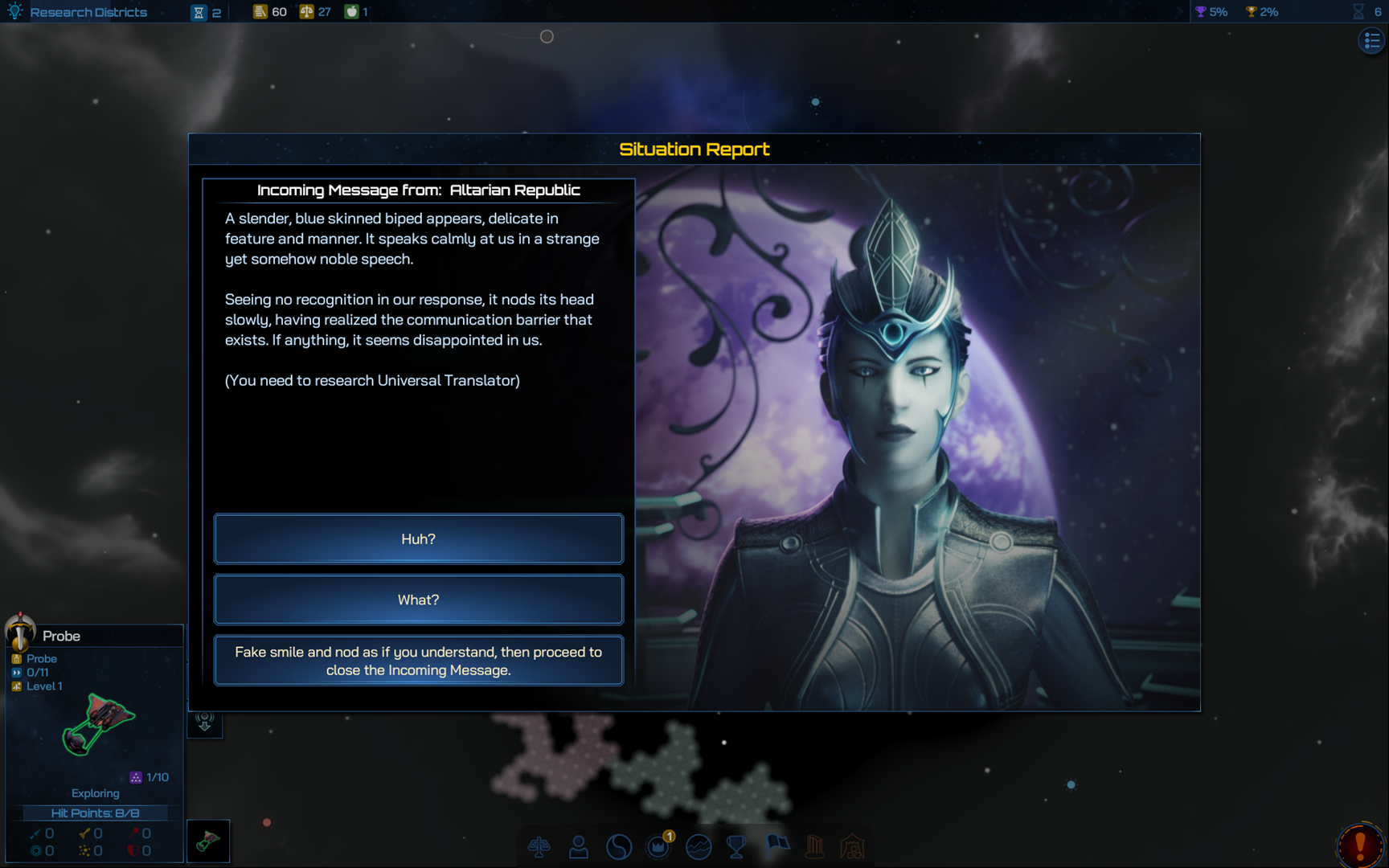 A victim - I mean, potential ally - happens along: the Altarians. This will work well, as they are unlikely to have invested strongly in their military this early in the game. And, my pleasing green tones are far preferable to their blue. I decide that they will make a great first target. 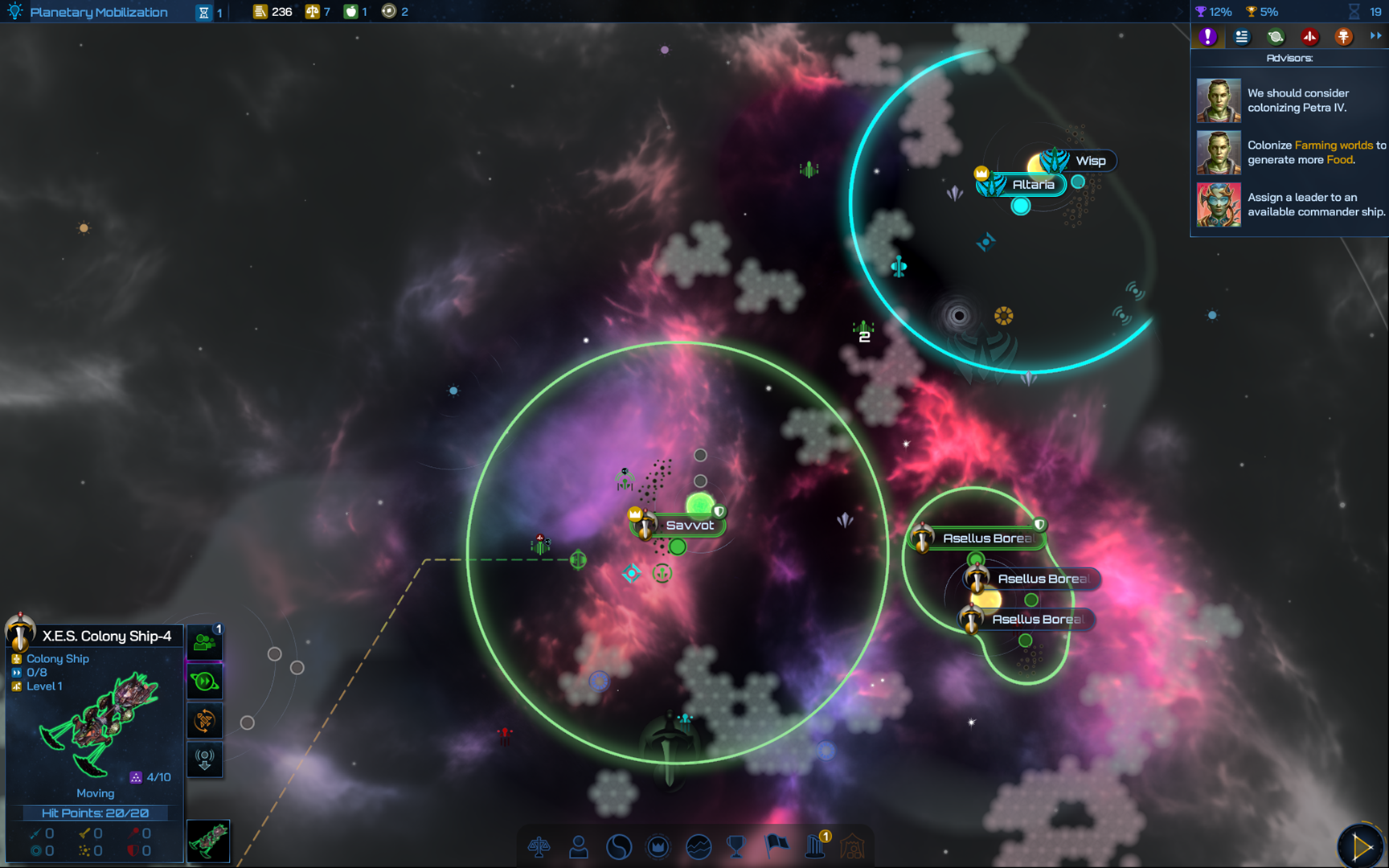 They are close to me, which is good - and they are weak, which is also good. The problem is, they're so weak there isn't much I can get from them. I don't have Planetary Invasion yet so I can't take their homeworld, and their colony, Wisp, doesn't provide enough natural resources to make it worthwhile. There are much better potential colony worlds out there that I wish the Altarians had for me to take.

I want to send out colony ships to these other worlds, but I need to make credits in my shipyard first. I used my executive orders to quickly grab the three worlds in the Asellus system. The thing I really want from the Altarians most right now isn't their worlds - it's their colony ships. So I don't declare war; instead, I lay a trap. Ships on their borders, waiting for colony ships to go out.

The plan works. After waiting for a few turns, the trusting Altarians send out a pair of colony ships. When they get close, I declare war and both are captured. I send the new colony ships to the worlds I want and then send in my military ships to take care of defenders and grab Wisp while I'm at it.

The war goes well and the Altarians can't launch much of a defense. But, I also discover the Drengin, Festron and Torians in the area. Of them, the Drengin are the most dangerous. I was in the middle of researching Planetary Invasion to begin the process of taking the Altarian homeworld when the Drengin decide they have had enough. 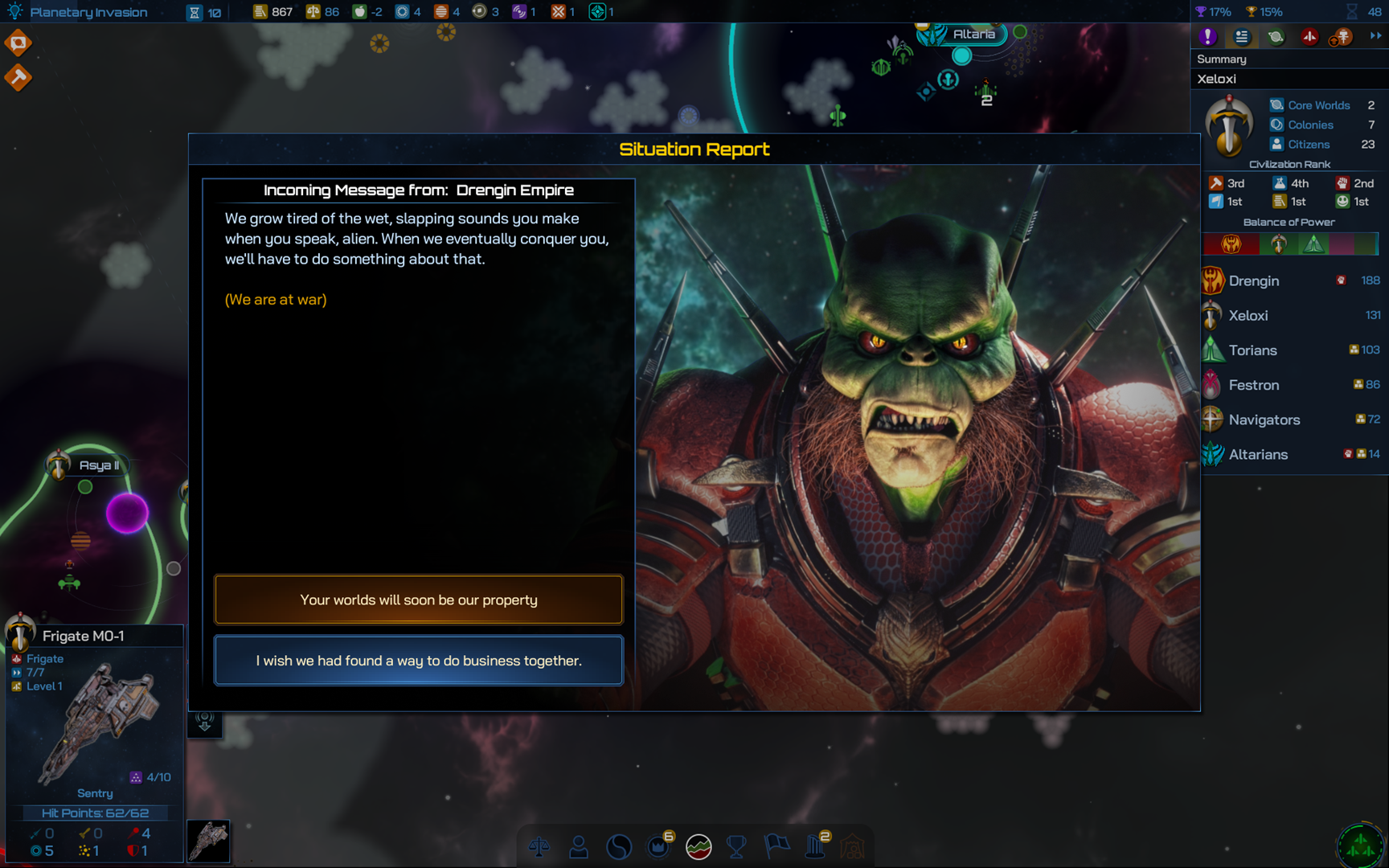 This is not good news. The Drengin are a real threat, especially given that I'm already at war. Even with the Altarians in a weakened state, the Drengin are going to require all my resources and I don't want an enemy right by my homeworld. Fortunately, the Altairans have been begging for peace and aren't in much of a condition to argue. 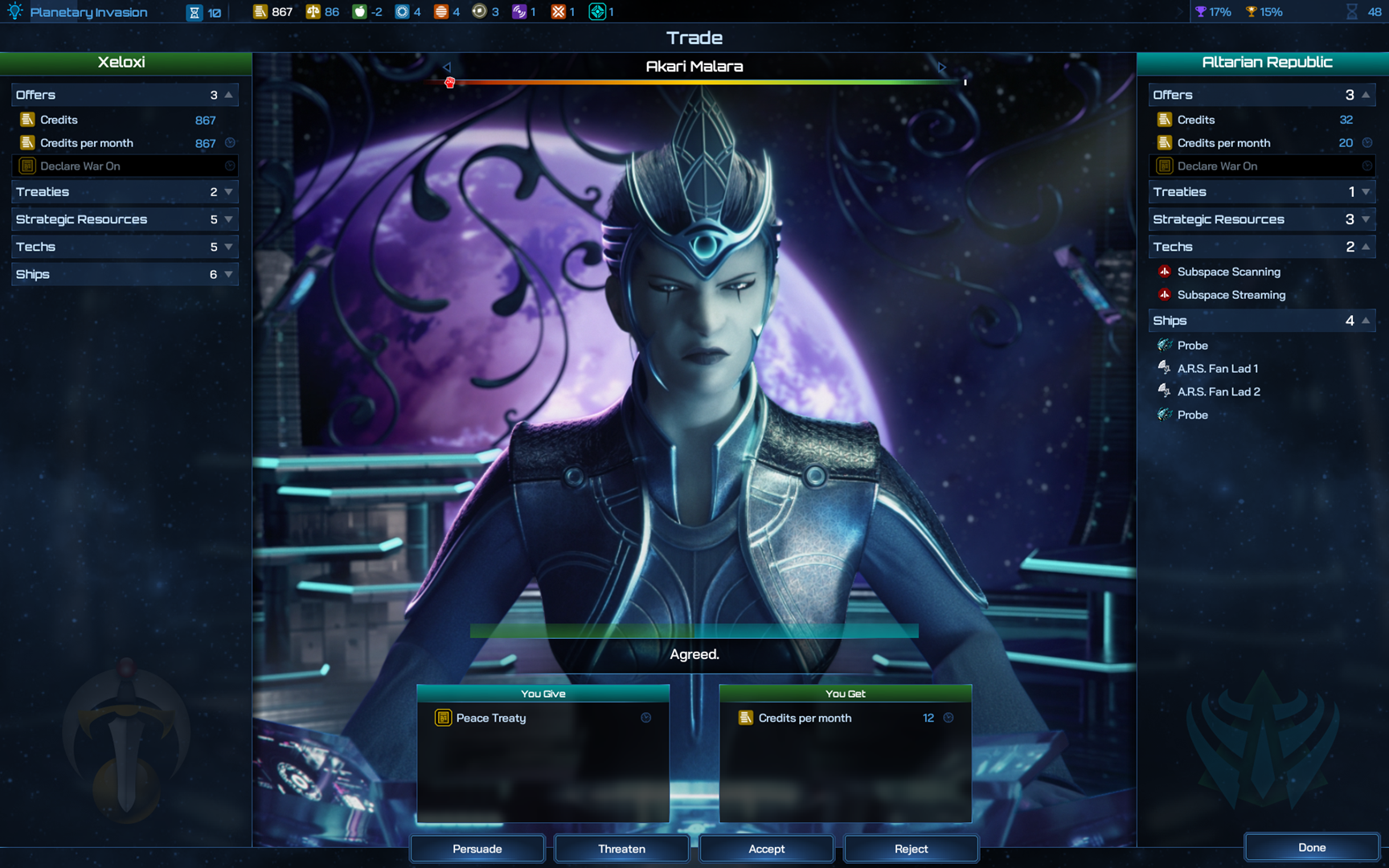 So, even though they don't like it, I grant them peace in exchange for some tribute that will help my weakened coffers.

But, I will need more to stand against the Drengin. 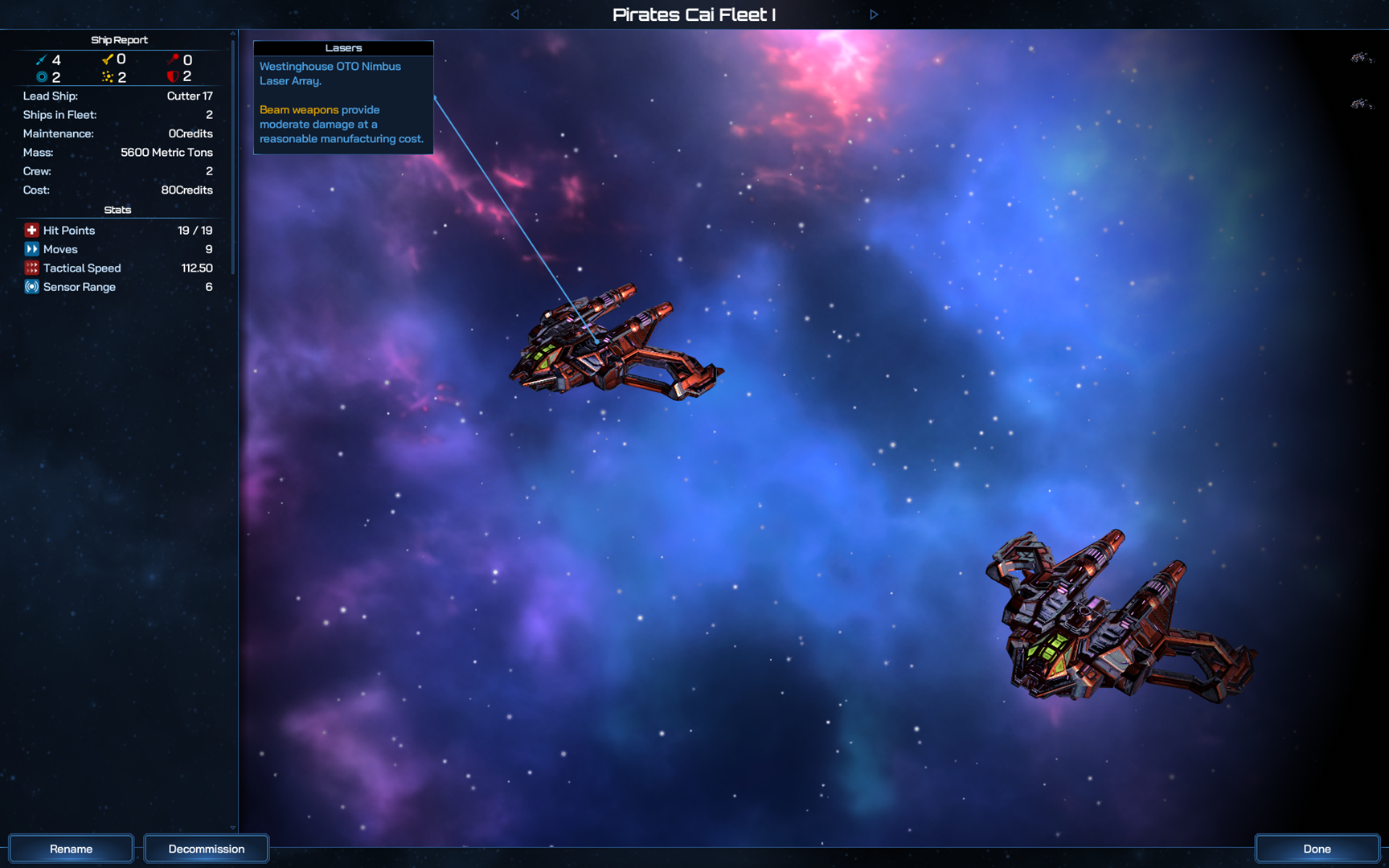 I use the Enlist Pirate Fleet executive order again and grab some nearby pirates. They aren't very powerful, but at this point anything helps. 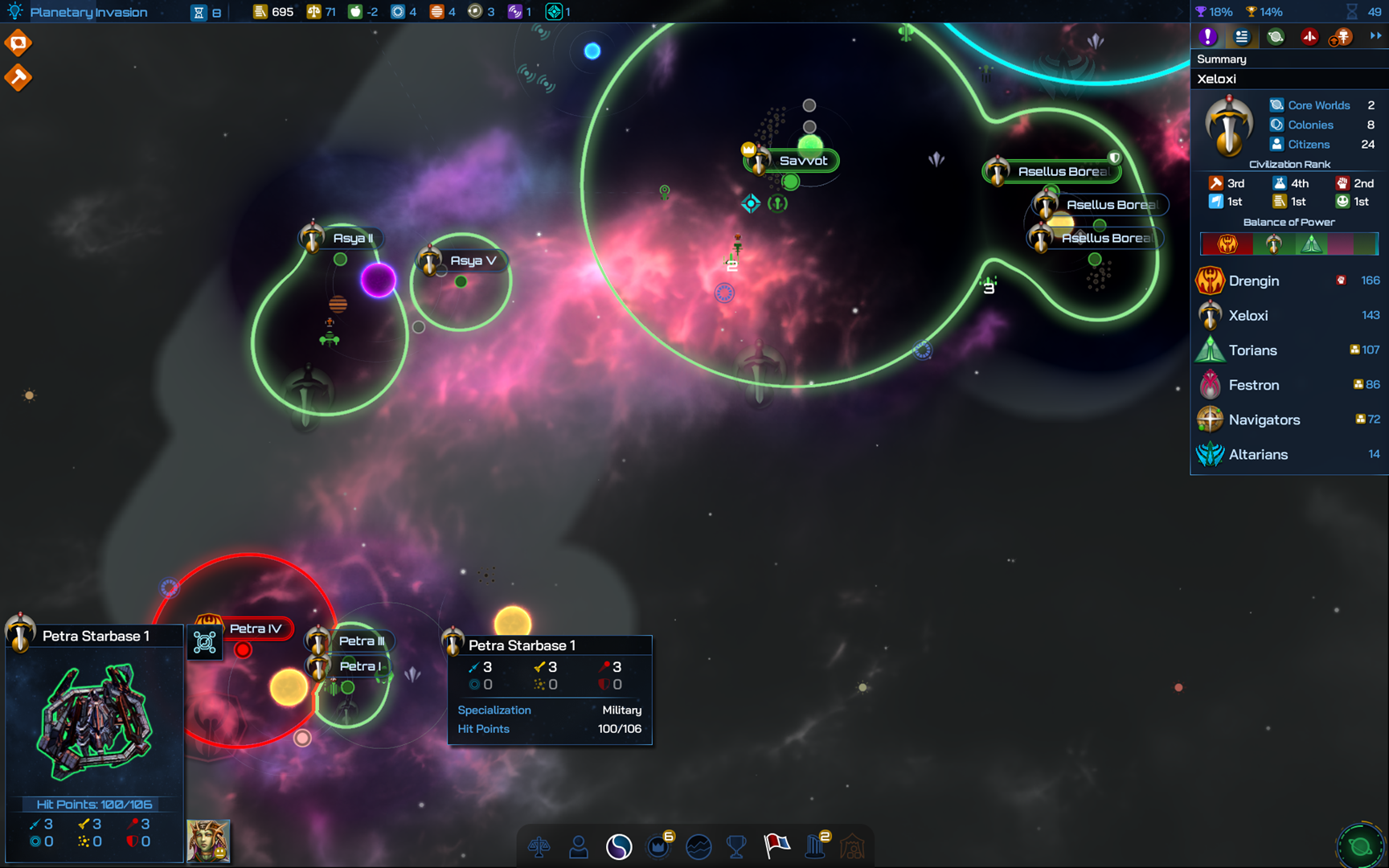 I also realize that I have a pair of promising colonies down by the only Drengin core world I know about. I intended to make that world one of my Core Worlds earlier in the game, but the Drengin beat me to it.

The colonies are far from my Core Worlds and I suspect the Drengin homeworld is also in the area. I know they will be hotly contested, so I drop a Military starbase beside them.

This is another new feature in 1.04: Military starbases protect worlds in their radius from Invasion. You have to destroy them first. That is no simple feat, and as they always have been, Military Starbases boost the weapons of allied ships within their radius.

Now, at least I have a foothold between me and the Drengin. We will see if it is enough.

This is just the start of the game, but I'm excited to let you all try out 1.04 soon so you can see what you think of the balance changes, fixes, and additions.