This has already been a bloody game. The map is fairly packed and my neighbors (the Torians and the Festron) spread quickly.

Usually, I would try to convince one of them to join me in a war against the other. But I'm playing the Arceans and we have access to some great commander warships, and I'm not interested in sharing. Instead, I pick the weakest of the two (the Festron) and attack at full force, hoping the Torians stay out of it. 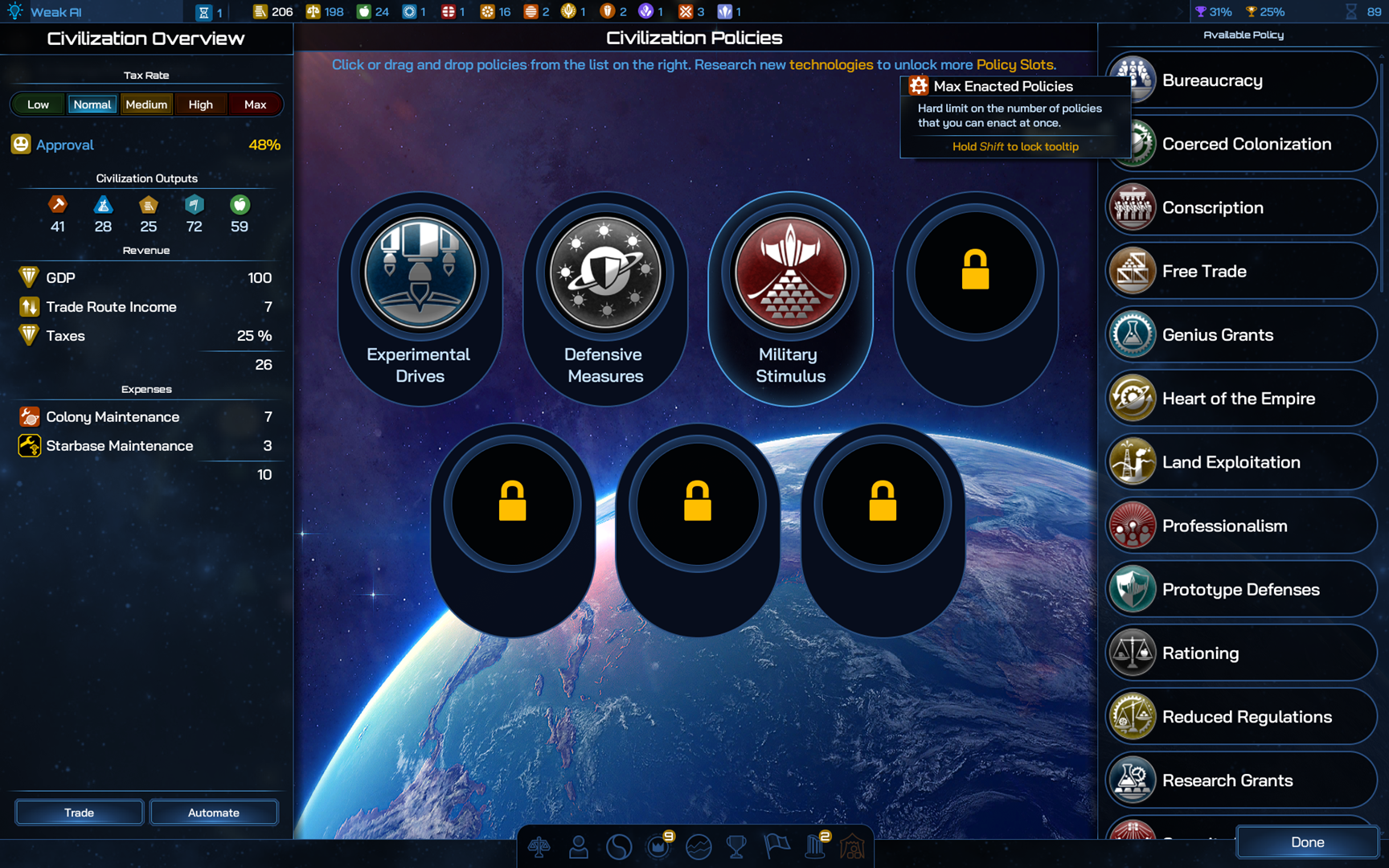 I set my policies to wage war. 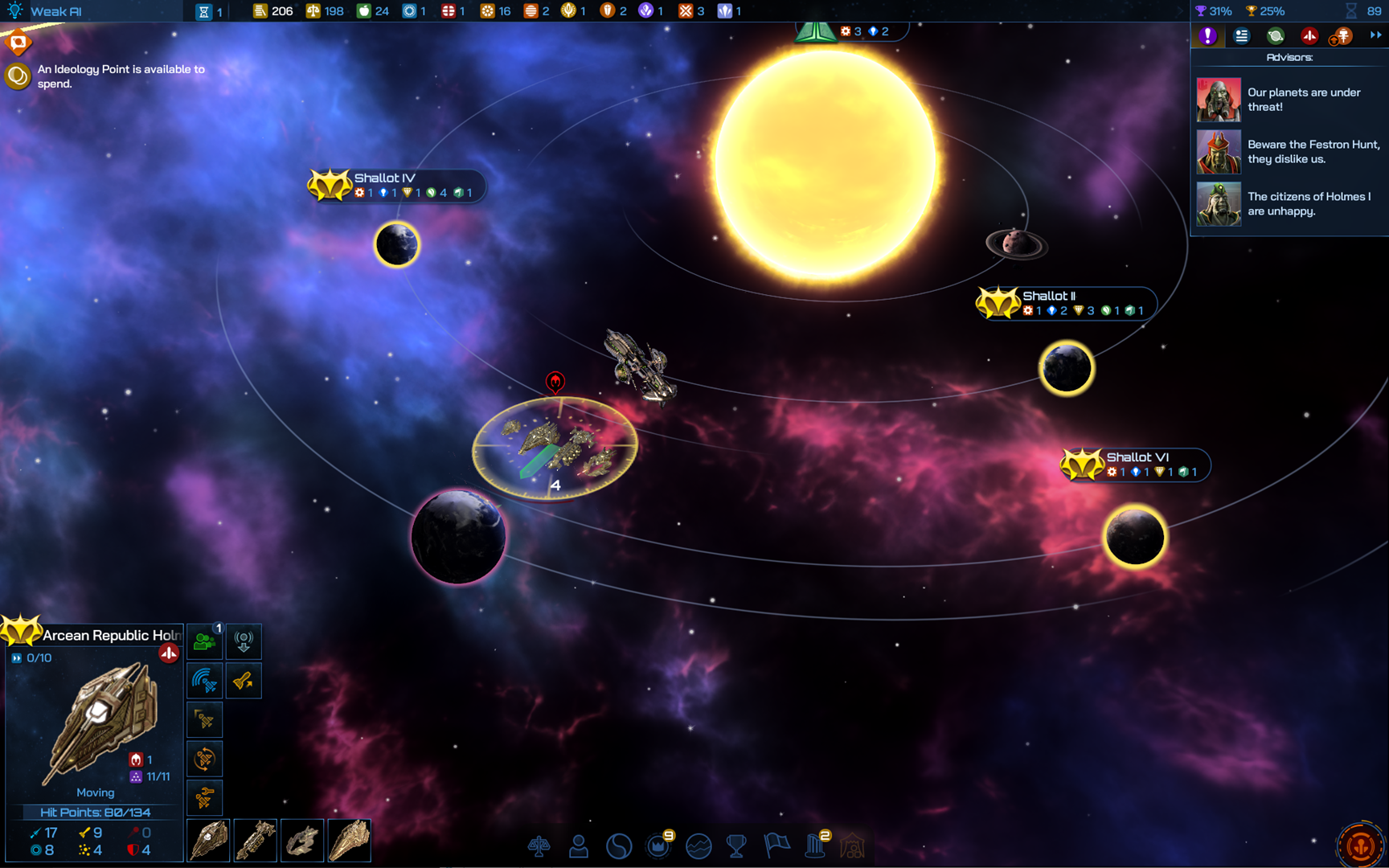 Trade routes and open borders with the Torians help make sure they don't take an opportunistic strike against me. And the war goes well. The above screenshot shows me laying Siege to the last Festron core world.

After the Final Festron planet falls I have a nice empire. I'm clearly ahead of the Torians and as brutal as it is in our sector, it was worse in other ones. We are getting Drengin and Navigator refugees from their wars with the Altarians in another sector.

But for now, I like my placement and I'm ready to build a culture network along my border with the Torians. They have grabbed some new worlds but I think I can flip them with a little effort. 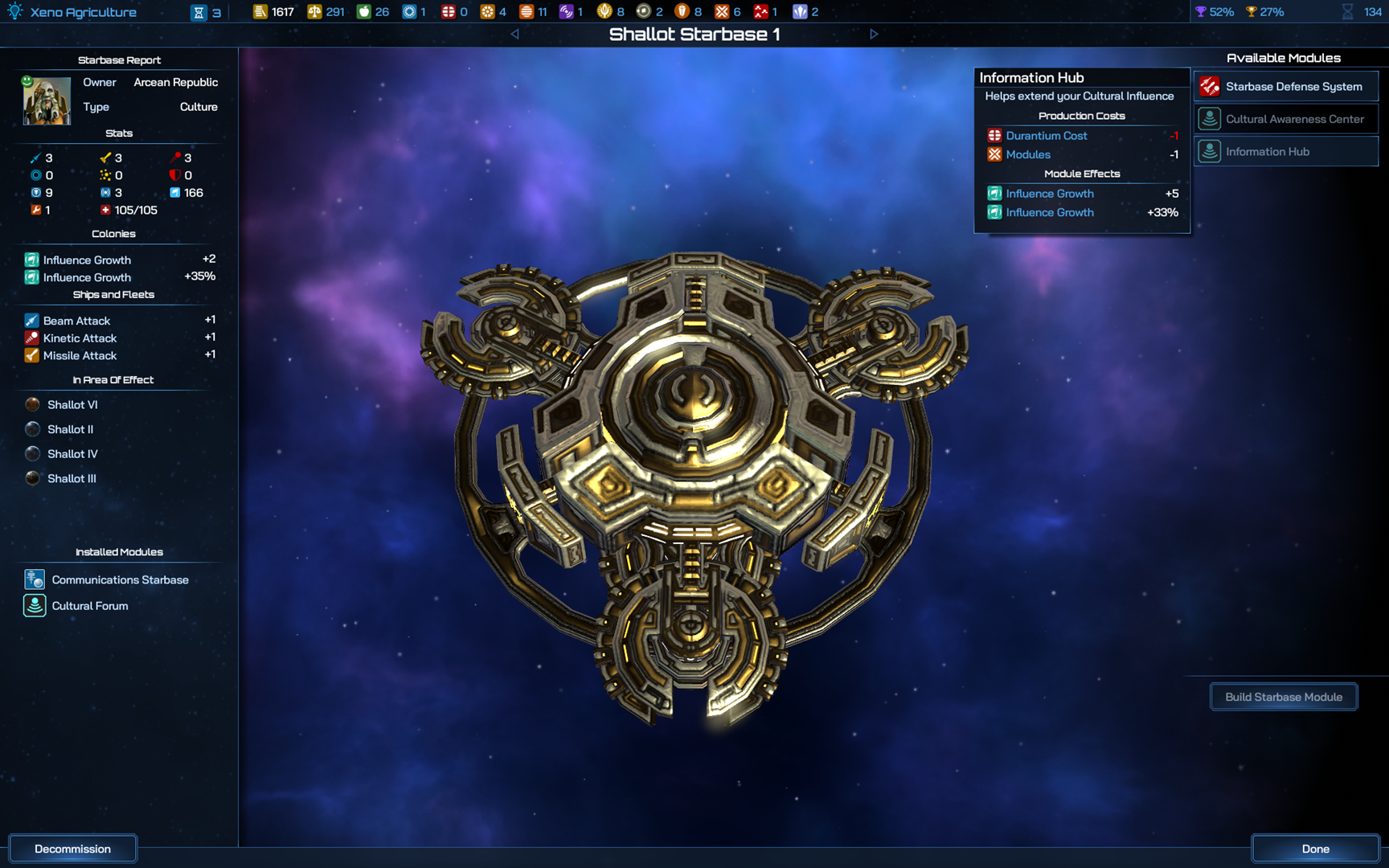 But there is a problem. My starbases cultural output is limited because there is only one source of Durantium in my sector. That isn't a lot and I used a ton of it upgrading my ships and building manufacturing improvements (in fact I've been buying it from the Galactic Bazaar and driving prices up).

I do have some good planets. 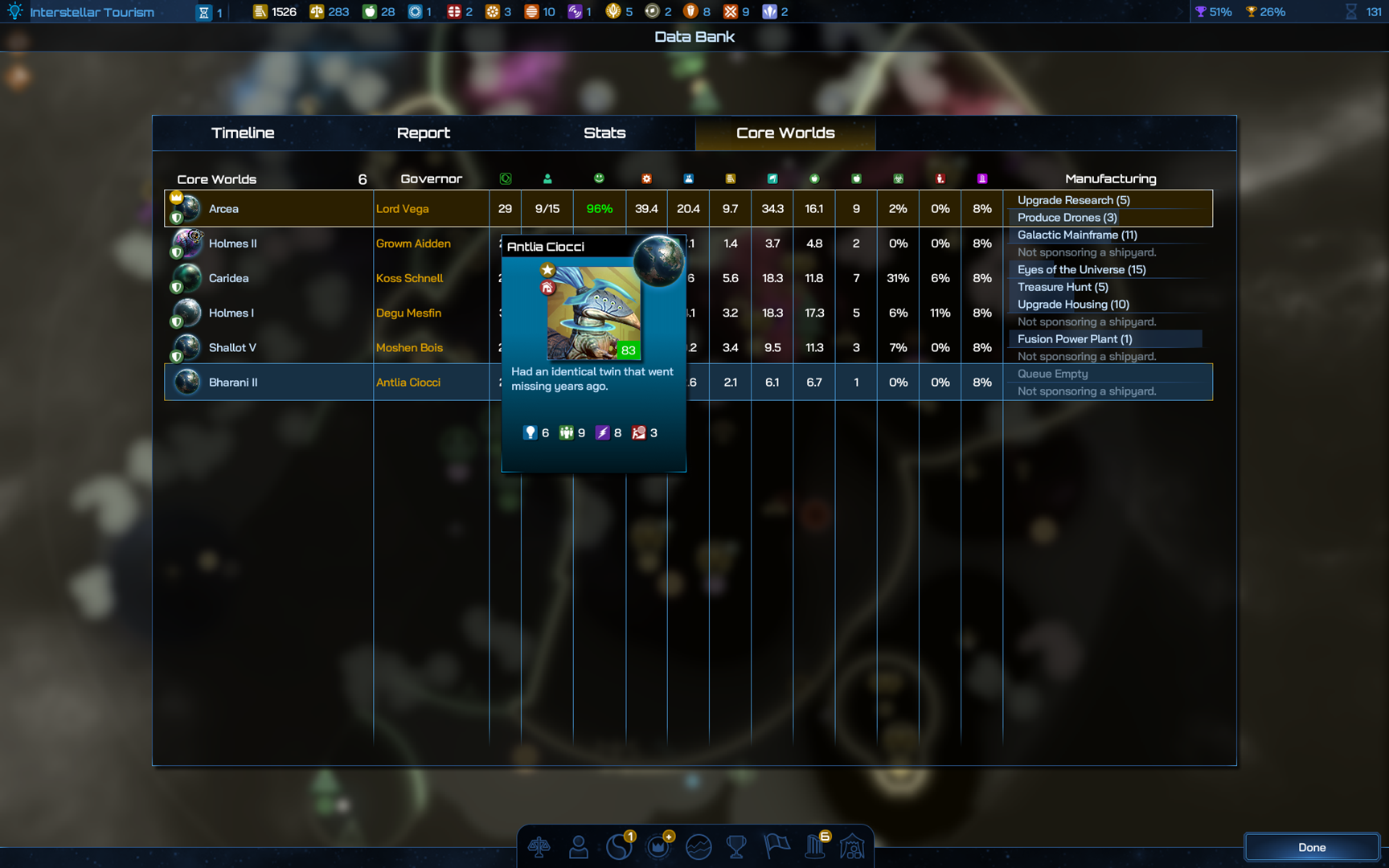 But a lost two of my commanders in the battle with the Festron.

I'm going to need Durantium if I want to fight a culture war. The Torian's already have starbases in the other sector, where Durantium is plentiful. So I'm even more worried that if I give them the time they will begin improving their own culture starbases. 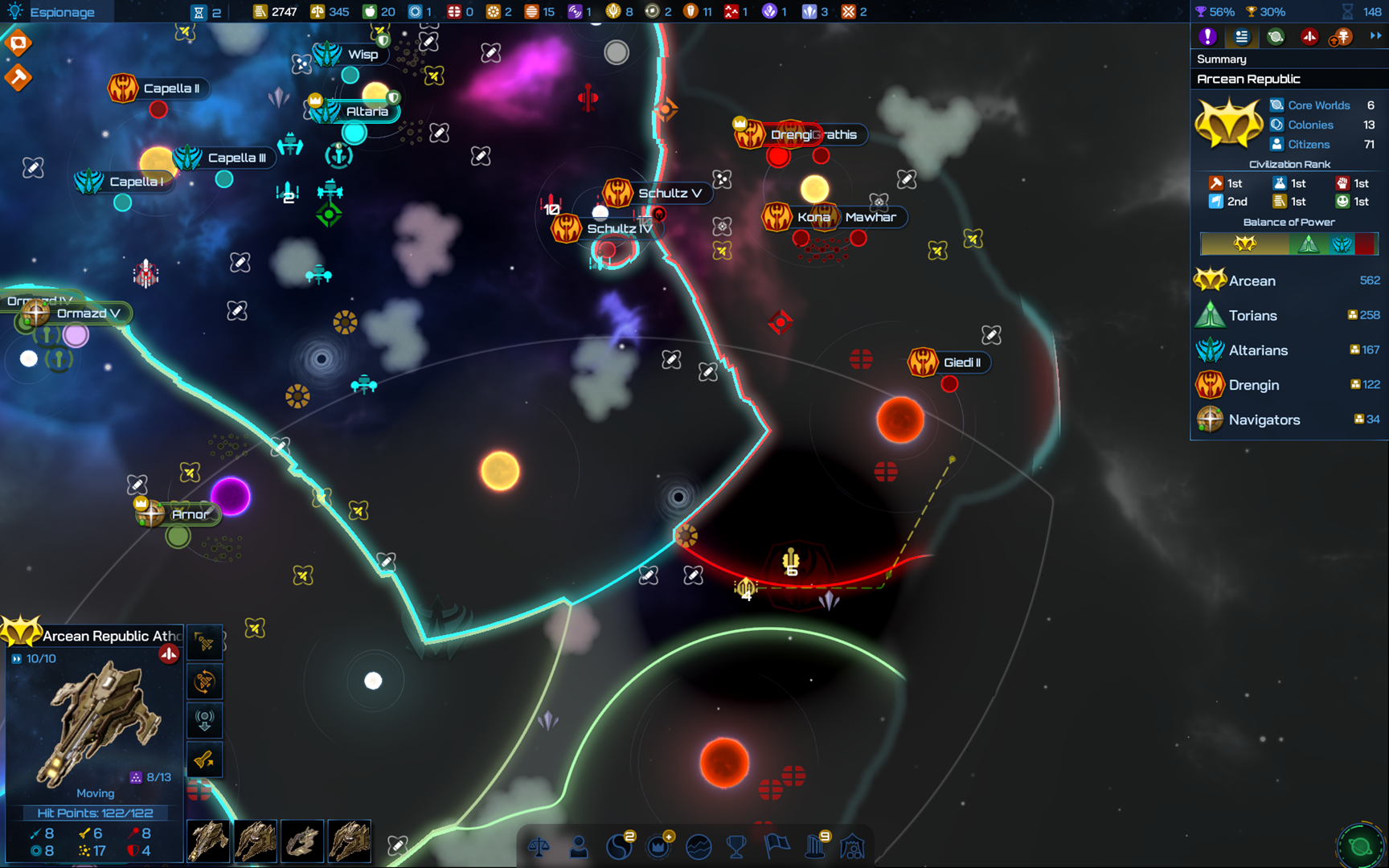 So it's off to the next sector I go. To see the war raging between the Altarians, Drengin and Navigators.

The Torians got a great batch of Durantium right by the gate. I should have done a better job exploring instead of just focusing on defeating the Festron. And I'm a little worried having the Torian homeworlds between my main fleet and my homeworld will end badly if they decide to strike.

But I maintain good relations with them as I move through their area to the weakened Drengin. They have already been beaten badly, but they are still holding on to a significant amount of Durantium. With only Transport fleet and another major war fleet to take out resistance, I should be able to claim that Durantium before it falls to the Altarians.